Is anyone else experiencing drops in network connectivity with their Tempest Weather Station?

It started yesterday as some serious weather entered my county. The problem initially affected the count for lightning strikes over a “3 hour” period with the counter continually resetting back to 0. After that, I noticed that the tempest was not updating for minutes at a time and then for over an hour. All of this occurred while using the Apple Tempest App (which I use on iPhone, iPad, and on MacBook all the time). It did not appear to affect “History” and “History” updated on the number of lightning strikes for the day. To rule out my own internet connection, I also have an Ambient Weather WS-2000 and it never once lost connection with updates occurring every 2 minutes.

Another more disturbing event took place after the rain had passed. I noticed my Tempest reporting high wind speeds with one gust over 36mph, but the wind was very calm with not much more than a breeze. I was also able to compare that and confirm the absence of strong winds with my WS-2000 weather station. Keep in mind these weather stations are mounted less than 10’ apart and are both just over 1 year old.

This morning before leaving for work, I rebooted both the base station and the weather station for good measure, but the weather station continues to occasionally loose connectivity with the network for minutes at a time. Anyone else experiencing these problems?

What is your station ID or the link to your station? It isn’t in your profile so some of us can’t take a look to try to figure out what is going on.

I had this issue about 6 weeks ago. My station frequently went offline. I have the Hub Power Bank. I removed it and plugged the hub in directly. I have not had an issue since. Eventually I’ll get around to plugging it in again to see if the hub starts going offline again.

It doesn’t appear that any data was lost, so at least the hub is able to back-fill when its connection the WF servers is reconnected. Maybe it is something like @jimyouse stated above. You could try a different hub power supply to see if the issue goes away.

What about the erroneous wind measurements? Has anyone else experienced this with their Tempest?

Yes, that can be a problem. Do a search on false-rain or false rain, and you will see several threads on the subject. WeatherFlow made many improvements over the original SKY device when creating the Tempest sensor, but vibrations in the mount can be still transmitted up to the Tempest sensor and be interpreted as rain. There are several things which can be done to mitigate the issue.

It wasn’t an issue with rain, but rather false “high wind speeds” after the rain event ended. It was reporting 36mph gust and the winds were complete calm (no wind). I verified this with my other mechanical weather station. Just really weird.

That is sometimes called rain on plate. There is a superhydrophobic coating in the wind gap to help water blow out so it doesn’t effect the sonic transducers. Sometimes there is a puddle of water on the plate or hanging from a transducer. If you can reach the Tempest you can blown out the water. If you can’t reach it then just wait for the water to evaporate or eventually get blown out by the wind.

Be careful not to touch the coating as it is very delicate. If it gets damaged the rain on plate issue is much worse. Since WF started applying the coating the issue observed has been significantly reduced.

Interesting! Do you know what it would take to accidentally remove the coating should I attempt to clean the weather station? Specifically in the area of the wind gap where the four (4) sensors are located? I am that guy that believes in occasionally checking and lightly cleaning my weather stations. Of course I normally don’t use a strong cleaning agent other than a very light application of dish soap on a wet rag and some soft damp paper towels. I mean I would hope the Tempest has been designed to handle a little cleaning along with whatever mother nature can throw at it (insert raised eyebrow). Thank you for responding as well.

Do you know what it would take to accidentally remove the coating should I attempt to clean the weather station?

I know that when we were at the end of field testing coatings, I cleaned some junk out of the wind gap with my finger and that damaged the coating. Basically, do not rub anything on it, ever. Some have used a mild bleach mix and sprayed it in the gap. I haven’t done anything to my stations yet and they seem to work just fine after being in the wet of SW Washington for over two years. I rarely have false wind with the current coatings that WF is using.

Any chance I can get some of this coating just in case this becomes an issue for me? I’m afraid I have already wiped over the sensors with a damp paper towel. Not sure, but I may have inadvertently removed the coating.

You probably did damage the coating. I asked about getting the coating to put on the non-coated units and was told it had to be installed in special equipment. During testing I did coat one of my units with a ceramic nano-coating and it did reduce the false wind readings. There is an algorithm that checks for reasonableness of the wind readings but it can always be perfect. As I understand it, after I coated my unit in the ceramic nano-coating, fewer readings had to be tossed and I did see fewer erroneous readings. You might try it if you keep getting water drops collecting on the transducers.

I have had my drop-off multiple times for the last two weeks come back on. I have readings on the main screen for the Tempest app but not temperature, Dew Point, and humidity when I hit the tempest icon on the upper right. I restarted the unit on the roof, signed out and in, and re-connected the Wi-Fi. No change.
I have not had an update on the weather for over 30 minutes. The hub is showing a blue light on the back. I thought, but I could be wrong it should be green.

The hub is showing a blue light on the back. I thought, but I could be wrong it should be green.

This means there is some Bluetooth device connected to the hub. Turn off Bluetooth on your devices one at a time to figure out what device is the offending one. The light should turn green almost immediately when the Bluetooth connection is terminated.

Update the hub went green, but still no updating.

You still have an issue with your Tempest. The Temperature and RH sensors are showing failed. Power the Tempest off and on again. If this doesn’t fix the issue then open up a support ticket. 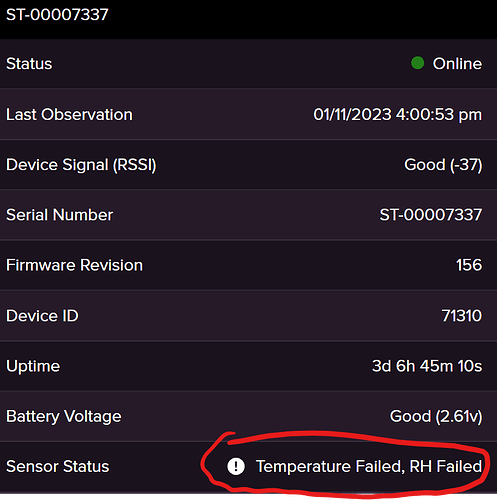 Thanks for the very fast replies and yes I have restarted it twice. I will open a support ticket.
Thank you!

Restarted the Tempest again. The light goes green on the bottom of the unit and then goes out. Is this an okay sign or not?

Update. Weatherflow was fabulous. I sent in a ticket about the problem with the station, they found my account for the purchase. A replacement station is on its way. I want to thank “gizmoev” for the help and Weatherflow for the great customer support.