On more than one occasion since I’ve installed this unit over last week we have gotten significant wind gusts in my location. The airport just a few miles away has reported wind gust well over 30mph and my amateur observations would corroborate that. However the wind readings on my system show 2.2 mph with gusts to 6, consistently. It is on a 10 foot steel pole in a decent clearing in my yard and is pretty stable On another occasion it was showing 27 mph wind gusts on a near calm day. Needles to say- I’m not pleased. Any suggestions? Can it be calibrated, or is the anemometer simply not working? Or is it just not one of its better features? If the latter is the case I’m definitely sending this thing back.

Might want to contact customer support. That sensor has been pretty good on the Tempest from what I can recall. Siting for wind specifically is difficult as you can get all kinds of crazy eddies and dead (or live) spots depending on height and surroundings.

Are you sure you have a Tempest unit, as you write you have it since a “couple of weeks”, I would expect it is a Sky

It’s a Tempest, just checked and active since may 15th.

Airport readings are not real good comparisons for urban sited stations. Stations on there are mostly in open conditions where your’s is middle houses and mostly much lower.

Wind is catchy and many thing influence it and several houses or tress in a street can create tunnel effects, or swirls …

here is already some from the windmeters page from Weatherflow,

Maybe you could post several pictures of the 4 directions around your house … this might give already a few clues what influences your readings.

And if you feel it is really wrong, you can always open a support ticket. I had a look at your data and don’t see anything special.

Weather stations near you might read differently for several reasons.

First, recall that wind speed and direction can vary greatly only short distances apart. For instance, the winds on the beach and the winds on the water can vary substantially. So, is the fixed weather station really representative of the winds that you are measuring with your WEATHERmeter?

Second, remember that weather stations themselves may have varying degrees of accuracy. Is the anemometer for that weather station well-calibrated and well-sited? Is it reporting the same wind speed units as your WEATHERmeter? Oftentimes, fixed anemometers will be sited at an elevation of roughly 10 m (33 feet). Hence, it is very likely to record higher wind speeds as the accompanying graphic indicates.

Wind speed decreases the closer to ground you are, even when you have a clean fetch upwind of you. This decrease is due to aerodynamic forces between the air and the ground. That means wind speed at 10 meters off the ground (where most anemometers are sited) is significantly higher than the wind speed at 2 meters (where you normally hold the weather meter). Our human brains automatically calibrate to this phenomenon, and any handheld weather meter will seem to read low. But it’s completely normal for a handheld weather meter on the beach to read significantly lower than what your experiences over water (or what nearby weather stations may report). 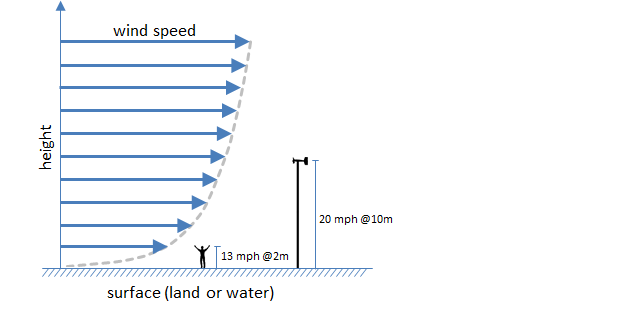