How do you protect your tempest weather station from lightning strikes? I lost 2 already due to strikes… Anyone can share your setup on which lightning rods do you buy and how do you position them not to block wind etc?

What was successful what not?

How many of you lost a station due to lighnig strike?

I’ve mine mounted on an acrylic mast, in an attempt not to attract lightning (and because of the looks)

There is no real protection against direct strikes. Insulating is futile and against codes. If anything using a non conducting mast will cause static build up possibly worsening the issue. This is why anything sticking higher than surrounding structures must be grounded.

I hear people saying they wear rubber sole shoes or the tires on the car protect them from lightning. It’s laughable. Seriously does anyone think about what is happening when you have an electrical discharge (the bolt you see) that just traveled through a mile of air (which is a great insulator) is going to be stopped by a few mm of rubber? That’s like protecting yourself with a bb gun against a nuclear missile!

You say you’ve lost more than one due to lightning. Are you experiencing direct strikes (as in the instrument pack is obliterated) or does the unit stop working after a strong storm?

i have to disagree, strongly. When the there is (for example positive) electricity in the clouds, electrons will be a drawn through a metal mast, especially when pointy. In a non conductive material like acrylic, there is no way to accumulate a huge amount of electrons. It will not attract lightning. Lightning rods work, because lighting is more attracted to those pointy conducting things. If lightning hits there, it is mostly safely going through the conductor into the ground.
Yes you are save inside a car. Not because of its rubber tires (those get wet in the rain and still conduct electricity) but because it is a Faraday’s cage.
Wet rubber shoes are not save at all.

Again, the mast material has little to do with actual lightning protection. Installation does. And for safety, codes must always be followed. The protection properties of lightning mitigation systems help protect against structural damage and personal injury. Loss of electronics is acceptable. Improper installation, however, will likely increase the risk that damage will occur in the event of any close strikes.

Mast material should be conductive as its supporting structure and properly bonded to a earth ground. This is outlined in article 810 of the National Electrical Code.

As far as risk from a lightning strike to your TEMPEST being better or worse, the material of the mast makes absolutely no difference whatsoever. I’ve seen trees half the height of towers not far from them take a huge hit from the top all the way through the main trunk and catch on fire internally. Even still, with proper grounding, equipment in the shack took a hit, spark gaps were darkened, some transmitter driver components damaged.

As far as protection in a car, I was merely mentioning nonsense what I’ve heard aka wive’s tales. Generally you are safe in a car but not completely safe particularly with some vehicle designs and materials. Fortunately getting a direct hit in a car is rare.

again, I just strongly disagree. Yes, if you want to have lightning rods installed for protection, proper installation is needed, with some good conductor capable of channeling (most of) the lighting safely to the ground. You could install lightning rods around your tempest to protect it. Although I’m not even sure if that is a good idea. Lightning is very powerful and not all of its energy will be conducted away through the lightning rod. The EMP itself probably would destroy the tempest. I’m assuming you would be better off with not attracting lightning in the first place.

As far as the tempest is concerned, a non conducting rod doesn’t attract lightning in a way a conductor does. Your tree is a pretty good example of an object that attracts lightning. It is high, has lots of pointy ends and is very much conducting. It will happily attract lighting (less happy once it does).

You could install lightning rods around your tempest to protect it.<<

That is not the purpose of a lightning rod, at all!

Proper grounding of tower, mast, supporting structure is all that is required.

All these “boutique” methods of using closet poles, pvc, et al to reduce vibration or for better appearance are absolutely hilarious! Follow the guidelines outlined by engineers that have done the hard work and call it a day!

silly. of course the purpose of a lightning rod is to protect whatever is in its vicinity.
Could you use a metal mast with good grounding as a lightning rod. yes you could. It will be very good at attracting lightning.
Does a tempest on an acrylic mast attract lighting, no not al all.

The purpose of a lightning rod is to protect. Not attract. It does not matter if your mast is made of teflon or pure silver. If lightning is going to hit it, then it will, period. 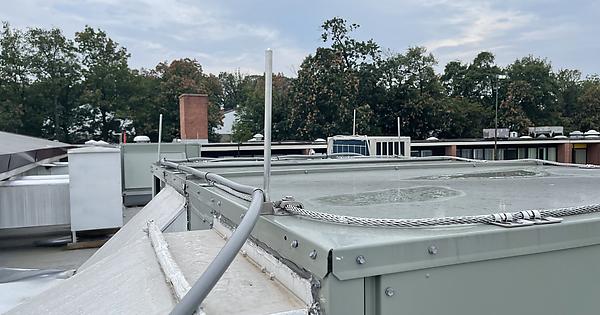 This facility was struck in 1987. They had no lightning rods. Damage was extensive. It’s a Church and school. The lightning protection system was installed after the building was repaired. Their electric organ was replaced. Since then there have been numerous storms and many trees around the facility struck directly. I took these pictures almost a year ago during an inspection when an IT company was installing some wireless equipment. Not one AC unit, computer, instrument has been damaged. I’d say that’s a go for me!

that’s not the way it works. It protects by attracting the lightning. Because the lighting is attracted by the lightning rod and safely transported to the ground, it doesn’t hit other objects.

I live in Singapore, which is a capital of lighting in the world. I lost a few weather stations after storms with lightings… they just stoped working… there was no direct hit… one time it was on the roof of a 30 story building… Second time on the balcony of the 28th floor apartment. both times high…

I am not considering putting the station at the pier sticking out at sea… Most storms are over water! but it will be just about 5 meters … But highest point on the pier… mounted on top of a light poll . light polls are all around the pier, so I figure can use one of them as my mast base.

What are your thoughts. ?

thanks for your comment… sounds like installing protection /. rods etc, may not be worth it as EMP in itself, is probably what destroyed my previous stations… there are lot of lightings where I live… I guess there is no escape from having to replace stations every now and then once they get hit.

Back in 1960 I worked at the 3WV medium wave radio transmitter located just outside Horsham. Victoria, Australia. This is prime Wimmera wheat growing country, flat as a billiard table for many, many miles in all directions. The 201 meter steel mast with a 20 meter hat in that landscape makes a very attractive target for lightening. The mast itself sits on a group of porcelain insulators and the guy cables have insulators at intervals. That 20 meter hat is also insulated from the mast but is connected via an inductor. The purpose of the hat is to act as an electrical capacitor in series with the inductor to make the mast electrically longer than it’s physical length. There are horn gap lightening arrestors between the top of the mast and the hat and between the bottom of the mast and the ground.
In summer when those white fluffy clouds pass by near the mast you can hear the crackling of arcing over the surface of the guy cable insulators.
There is no way to prevent a static negative charge from progressing up to the top of the mast. Lightening strikes are invertible so protecting the mast is required. That is the job of the horn gaps. Lightning current passes across the gaps, protecting the inductor and protecting the transmission line feeding the radio signal to the mast.
I’m told that a typical lightning strike is about 1 giga joule of energy so to protect something requires a large conductor capable of conducting thousands of amperes. It should also take the most direct route to earth as the electrical field generated by the electrical current attempts to force the current to straiten out any bends.
Will having a non-conducting mast prevent lightening strikes?
Well as aeroplanes regularly suffer lightning strikes, probably not.
As not all lightning are not ground strikes there is a possibility of a discharge between the insulated from ground weather station and a charger region nearby. Weather stations can accumulate charge from precipitation.

an isolated mast is something else as a non-conducting mast. Electrons are free to move inside your isolated tower, making one end positively charged and the other negatively when those fluffy clouds are near.
A plane is also very much conducting, when flying through a cloud it could even pick up charged particles and might even initiate a strike. In most cases lightning passes just through a plane (the outside aluminum body) because lightning tends to follow the shortest path and a bit of good conductor always helps.