we have a lightning storm had 39 strikes and now suddenly all my strikes are gone. what is going on with the lightning on the tempest network. I feel a few years it worked great now it says N/A in the middle of a storm. i don’t get it. Tempest network i feel was better years ago. Too much filtering or something going on. 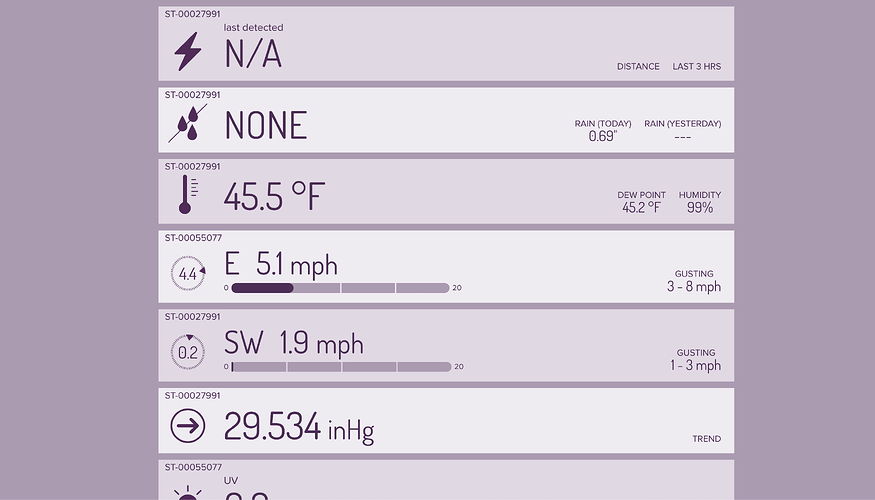 Was it possible that when you were looking at the screen (your screenshot) you were via bluetooth linked to the hub directly and not a ‘normal’ view via internet ??

This could explain, since you only see what is direct raw. See how your rain yesterday is dashed and same for pressure trend missing? These are signs you’re not linked to our servers but direct to the hub.

What is ble status disconnected

We had a thunderstorm go through here in SE Pennsylvania last night, and, watching both wfpiconsole and the browser and saw the same results … lightning initially being reported nearby in both interfaces and then disappearing, showing N/A in the browser and dashes in wfpiconsole (if I remember correctly … I rarely worry about lightning reports from the Tempest, so, I did not bother to grab screenshots). This happened a few times during the event. So, a bluetooth connection during the event does not look like a factor.

Whatever it was, looking at things this morning, it looks like things are better (it is reporting lightning occurred 13 hours ago which is about right), so, the bogus display does seem to correct itself.

I had the same storm in NE Ohio last night and I observed the same on my app. I was watching it pretty closely as it was the first lightening we’ve had in a couple of months and I have been working on project that utilizes UDP data from the hub. I observed that the lightening data was showing the same as the pic in OPs post, but at the same time, I was watching the logs of my program and it was registering lightening strikes. It didn’t always stay with the NA and dashed though. Sometimes it would show the strikes, sometimes it would show the NA.

I assumed it was just a flukey little quirk that was happening, but seeing this post today, felt like it might help if I shared my experience too.

Some additional info I just noticed. On my Weather Underground data, there is no report of data for rainfall during that period when the lightening was showing NA

Had a conversation with our technicians.

The ‘bug’ has been identified and it will be solved. No ETA. In most cases the problem is ,as mentioned by some, temporarily and after some time resolves itself but nevertheless, better to squash it.

Thanks for bringing it up.