Note that although the graph of tempest is impressive, it mostly shows data from other sources. I would like to see what is measured with MY system. As mentioned, I propose to show the third party data as dots and the station’s data as the familiar bars.

So it is quite possible to interpret this as the trailing edge essentially becomes the “leading edge” when the storm has passed overhead. Unfortunately we don’t get enough lighting in the UK to really test this, hence my unfamiliarity.

That is certainly how I interpreted it.

We are due storms for the next 2 days if the alerts are to believed (red alert for 2pm until 2am for me), so hopefully some more opportunity to view

Yes, this was my mistake. I interpreted “leading edge” too literally.

I must have angered some lightning god though, as no sooner did I say “we don’t get lightning in the UK” we got hit by a big storm! 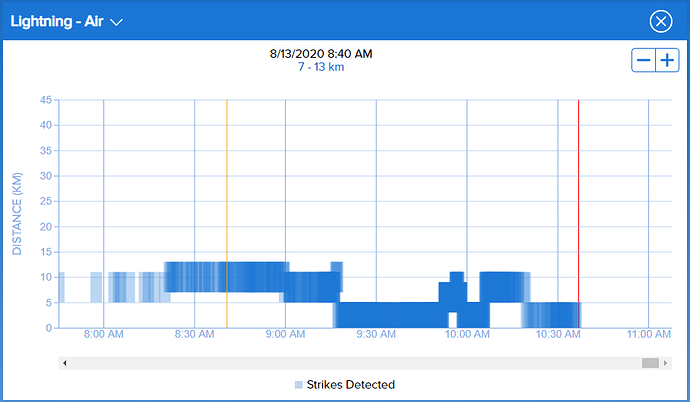 I must have angered some lightning god though, as no sooner did I say “we didn’t get lightning in the UK” we got hit by a big lighting storm!

Yes, this was my mistake. I interpreted “leading edge” too literally

Exactly. To say that

Keep in mind that the sensor in both Air and tempest only reports strikes at the leading edge of the storm.

is not only misleading, it’s totally wrong. It will detect any strike within it’s distance parameter. When the center of the storm is overhead and a strike hits 100 yards from your Sensor array, do you really think it won’t be detected? Of course it will!

That table simple shows how the detector tracks the edge of a storm. In fact it might not be the leading edge. It’s the edge that passes closest to your site, which could actually the side of the storm.

What’s puzzling is why the datasheet refers to the leading edge at all then. It would clear up much confusion if they just referred to the “closest edge”. The use of leading edge implies some sort of directionality, which is just not the case.

I’ve made an agreement with myself not to go into Gary’s postings anymore. It would be better if he ignored mine as well.

why the datasheet refers to the leading edge

I think it is an attempt to explain how the distance is calculated. I’m going to continue the device development team that built the detector and ask them to clarify. The amount of incorrect information being posted on this forum is getting ridiculous. Too many are posting opinion as fact.

The use of leading edge implies some sort of directionality, which is just not the case.

I’m fascinated at how everyone describes a thunderstorm and lightning bolt in two dimensions, neglecting the possibility that the AS3935 could be detecting the top of the bolt (or cloud-to-cloud) 8+ miles high.

As I’ve written so may times that I’m turning blue in the face, the AS3935 is a consumer device – not a scientific instrument. Any attempt to use the range calculations should be considered for entertainment purposes only, and filtering alerts based on distance is a legal recipe for disaster…

Thank you. So many just don’t get it and don’t think about the realities of what is in use.

Any attempt to use the range calculations should be considered for entertainment purposes only,

and the old rule of ‘if you can see or hear it, you are too close and need to take shelter’ always applies…

Not sure if you were chastising me, but I agree with you. I was expressing that the use of “leading edge” in the documentation is misleading

It certainly is if you don’t understand the context and especially when the context is not clear. Fortunately I have knowledge of the device from other projects and know better than that misleading statement made here. As soon as I get factual information from the manufacturer I will post.