it should be at most 4 because there are 4 zones, but yeah, that repeats after half an hour. As your storms were moving slowly you got all those extras. I sure hope @dsj finds the time to implement some improvements that would have limited it to 4 per storm.

I’m afraid it isn’t working as advertised. This is a snapshot of my latest notifications. 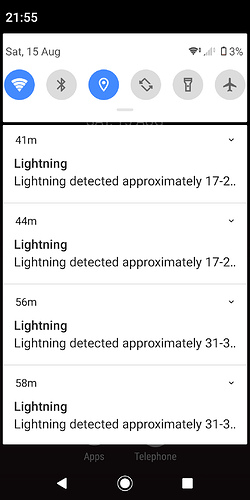 Screenshot_20200815-2155461080×2160 122 KB
Within half an hour, 2 warnings from zone 4, 2 from zone 3.
I have a strong suspicion that the notifications also don’t match with what I see in my graphs.
Edit:
I just realized that it might be confused by my indoor air unit. That has the option “disable lightning” activated, but perhaps your notification algorithm is ignoring it by mistake. That might explain the graph not matching the notifications and the double notifications.
dave August 15, 2020, 9:56pm #34

I just realized that it might be confused by my indoor air unit. That has the option “disable lightning” activated

I mentioned that in another thread, mine is the same, disabled, but do you see reports on the graph for it? I do now (didn’t before), and am also getting notifications from that device.

I guess I don’t see them in the graph but I do get notifications from it.

Thanks, guys. It sounds like this is a bug in the lightning disable feature that may have been introduced recently. We’ve got it on the list and will investigate soon.

Thanks @dsj - just for info, this was the post on the other thread, including a graph showing the lightning on the indoor Air: Lightning detection off

My first major thunderstorm since setting up the Tempest was last night, and it detected over three thousand lightning strikes in the very early morning hours. Fortunately my phone is set to vibrate pretty much permanently, but there was an embarrassing number of lightning alerts when I woke up. It sounded like new settings for control of notifications might be on the way already?

Hi, I love the idea and very excited to see you rolling out the lightning strike distance option and frequency alert options.
I have also noticed on my station that some lightning isn’t being detected by the unit. Is that a function of sensitivity and can that be adjusted?

I haven’t recieved my Tempest yet but I will have to wait until October (or earlier if the weather is good to me) until I can really start testing the lightning feature here in Melbourne, Australia (yeah I know its 1:20am here but I’m excited to recieve my Tempest and we are lockdown, so can’t do much).

Just thinking about it, how is this possible to detect new storms if it can’t work out the direction they are coming from? For example a storm that was detected in the 20km radius would end up in the 20km radius again on the other side. So wouldn’t that trigger off another warning for the same storm since it’s been reset for that zone after 30 minutes?

I think you need to work out how fast that storm is travelling to be able to track it.

yes it would trigger another warning. If you really want to track thunderstorms, use something like https://map.blitzortung.org/#3.88/-27.49/139.56, but at least you got a warning to find a safe place and/or to start looking at the map

@dsj Just wondering how far off is this going to be implemented in the app?

It’s still on the road map, but we don’t have an ETA yet.

I’d LOVE it if I could leave lightning alerts on, but only get the first notification

If there is an an ongoing storm for 2 hours, I don’t need all the alerts. Perhaps a 2 hour cooldown period, where if there is no strikes for 2 hours, it will then alert again

Is this possible? I want lightning alerts, but when I get one every 20 seconds its pretty pointless

You may want to read through this topic as it pertains to what you are asking. Also, vote for it as I think when I merged your post here it freed up your vote.

This would be GREAT!

Update on lightning strike app improvement? I just turned off mine off, which is a shame, but I couldn’t take receiving an alert every minute for a storm that’s over 20 miles away. (Cool feature but essentially worthless if you can’t control the distance and alert notifications.)

before that we have to go to march 8th

As I asked for someone else in another topic, do you get notifications via other 3rd party apps (eventually linked to Weatherflow ?) because we don’t see the flow of alerts send you mention.

I read often ysome want to limit the range to like a mile or 2 … This will not work as the little unit in the Tempest is meant as early warning, not just next door. And all detectors work way less once lightning nears as it has to turn down radically its sensitivity to survive → less accurate. I won’t go in details on how a network like Blitzortung works but once it is like nearing 20 km, your detector just isn’t used anymore because the signal is way to jammed. Others in the network will be used to triangulate for your position.

Now let’s try another approach, a lightning can travel far, really far from its origin point, like over 500 miles … not very common I admit but between 0 and 20 miles isn’t so unusual. And now comes the fun part, the bolt travels at +/- 250.000 mph → +/- 70 miles a second … you will see the flash an instant before it drops next to you …

An early warning system is useful when it is ‘early’ enough. Everyone is free to disable it.

that is more like the expected behavior. only a few alerts per storm (once for entering each of the four “sunny” zones as a maximum per half hour).